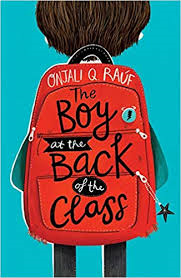 In dark times, we need stories to help us see the light. The tale of a Syrian refugee starting an inner London junior school, The Boy at the Back of the class could easily have been gritty and gloomy. Instead, it’s sparkling and uplifting. Fundamentally, it’s about the importance of kindness – making it exactly the story for now.

Written in the first person, this middle grade novel is narrated by a nine-year-old, whose name and gender aren’t revealed until the last chapter. This delayed reveal could have been so clunky. Instead, it’s cleverly done by debut author Rauf, who creates a lively voice, free of gender stereotyping. (When I did find out the narrator’s name, I had a bit of a Sixth Sense moment and had to go back and check I definitely hadn’t known it before.)

The premise is an update on the trope of the strange new kid at school. When refugee Ahmet fills the once empty chair at the back of the class, his new classmates are curious. Who is he? What language does he speak? And why doesn’t he come outside at break time?

The narrator decides to befriend this quiet and patently sad boy. She (sorry, should’ve done a spoiler alert there) and her three besties shower him with sweets and other food offerings. At first, he’s nervous and reserved – but their empathy and sheer niceness soon wins him over. He becomes the fourth member of their little gang.

The plot deals with challenging issues, but with a lightness of touch that doesn’t belie their seriousness. Through Ahmet’s tragic back story, the narrator and her friends learn about the refugee crisis. They also encounter prejudiced attitudes among their own family members. Thanks to her narrator’s sparky innocence, Rauf manages to handle it all with grace. She doesn’t shy away from portraying a grownup world that is disorientating and frightening – but also shows children they have the power to effect change.

In an age in which intolerance is on the rise, The Boy at the Back of the Class should be required reading for all children – and grownups too.