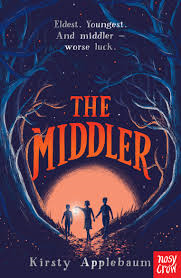 Ok, here’s the disclaimer. I’m a middle child. I grew up squished between a big brother and a little sister. Despite reading voraciously, I struggled to see myself reflected in fiction (literature seemingly still mired in the fairy tale mythology that prizes first and third-borns. Just ask any wicked witch seeking vengeance by demanding a newborn babe or Cinderella). That’s why I was drawn to this debut middle grade children’s novel. Finally a story that puts us middlers centre stage!

I’m sure you all know the stereotypes about middle children. Lacking the privileges of the eldest and the cosseting of the youngest, they supposedly feel left out and overlooked. Obliged to fit in with those around them, they also tend to be compliant, people-pleasers and peacemakers. (And, no, of course, none of that applies to me. I was totally and utterly fine with my big bro getting to do everything first and my little sis crashing through all the rules I’d politely adhered to. Ahem).

And so it is with Applebaum’s heroine, Maggie. In the shadow of her adored big brother, Jed, and called upon to look after her little brother, Trig, she usually goes unheard. The thing is, there’s special significance for sibling order in Maggie’s world – because she inhabits a near-future dystopia in which families are obliged to give up their oldest child to fight in the ‘Quiet War’, which rages somewhere off-page.

At the start of the book, however, Maggie still hasn’t worked out that being sent off to become a combatant in a war the day you turn 14 isn’t all that great a deal. (Especially as none of the older siblings come back. Like. Ever.) She’s just annoyed that Jed’s won yet another prize at school for work she can see is lacklustre.

As preparations for her big brother’s send-off ramp up, Maggie encounters a wanderer – a girl who moves freely beyond the rigidly circumscribed limits of her town’s boundaries. All her life, she’s been told such people are ‘dirty, dangerous and deceitful’ and yet, she strikes up a friendship with this newcomer. This sets off a chain of events that sees Maggie – the quiet, unnoticed middler- reveal the shocking secret at the heart of her community.

As a middle child myself, I’m obviously biased, but I absolutely loved The Middler’s sibling order premise. Beautifully written, it’s classic middle grade – with friendships, betrayal and the duplicity of the adult world as its foundations – but with a strikingly contemporary dark edge.